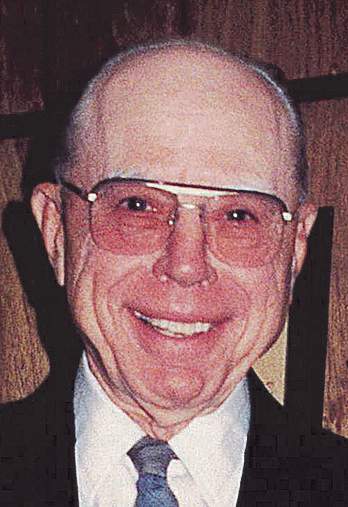 Marvin was the son of Oscar and Freda (Wortman) Boehlke and was the middle of three children born into the family.

Marvin graduated from Ayr High School in 1937. He joined the U.S. Army six days before the attacks on Pearl Harbor and faithfully served our country during World War II, being discharged on December 16, 1945.

He was a lifelong member of the American Legion. In October 1943, he married his sweetheart, Helen Metzer, with whom he shared his life until her passing in July 2007.

Following the war, Marvin served as a U.S. Postal Service employee in Hastings for many years, retiring in 1957. He then joined the Howard Koepke office of Bankers Life of Nebraska (now Ameritas) until he retired from the insurance business in April 1978.

Marvin learned to fly and even purchased an airplane. Taking friends and family members flying and playing golf were two of his favorite pastimes.  Shortly before his death, he resided at the Heritage in Grand Island, then at the Cove House in Lincoln.

During this time, he enjoyed the company of many friends, family and caregivers, some of whom were with him when he passed on May 1, 2019.  Marvin is preceded in death by his parents, his wife, and his two sisters, Erma and Irene.

Survivors include his loving godchildren and cousins.

A visitation is 10 a.m. on Tuesday, May 7, at Livingston Butler Volland Funeral Home & Cremation Center in Hastings, followed by a graveside service with military honors at 11:30 a.m. at Parkview Cemetery. Luncheon to follow. In lieu of flowers, memorials may be made to The American Cancer Society, The American Legion and Hastings Zion Lutheran Church.

To order memorial trees or send flowers to the family in memory of Marvin Boehlke, please visit our flower store.