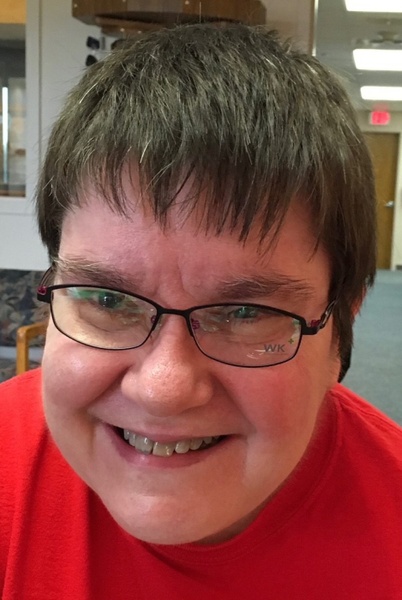 Rosary will be 7 p.m. Friday, October 29, at Butler Volland Chapel. Mass of Christian Burial will be 10 a.m. Saturday, October 30, at St. Cecilia Catholic Church in Hastings with Father Denton Morris officiating. Burial is at Parkview Cemetery in Hastings. Visitation will be 1-8 p.m. Friday with family present 6-7 p.m. at the funeral home and one hour prior to service at the church. Memorials may be given to Harvard Rest Haven, 400 East 7 th Street, Harvard, NE 68944. The service will be live-streamed on Livingston Butler Volland Funeral Home’s website. To view the service you will need to go to Mary’s obituary and click the play button shown towards the bottom of the page.

Mary was born on November 16, 1961, in Hastings, NE to Eugene & Barbara (Kile) Garvin. At age two, Mary was diagnosed with cerebral palsy. In 1971, she was named the Nebraska Easter Seal Child. Mary was a member of the Sacred Heart Catholic Church in Nelson where she was baptized, made her first communion and confirmation. She graduated from Nelson High School in 1980 with numerous awards and scholarships which she used when she attended Hastings College. Mary belonged to the Kappa Rho Upsilon Sorority.

After college, Mary took a huge step when she moved to St. Louis where she worked for the IRS for a couple of years and then transferred to Omaha to be closer to family. Due to health issues, she retired and moved home where she volunteered at Nelson High School and taught catechism. After her mom and she moved to Hastings, Mary was a GED instructor with the Hastings Literacy Program. After her mom’s passing, Mary lived on her own until her health declined. Mary then moved to the Harvard Rest Haven where she made lots of new friends which she considered family. While at Harvard, Mary joined Teammates and also taught catechism. Family and her Catholic faith were very important to her. Mary was very strong-willed and an inspiration to others.

Mary was preceded in death by her mother, Barbara Garvin.

To order memorial trees or send flowers to the family in memory of Mary Garvin, please visit our flower store.