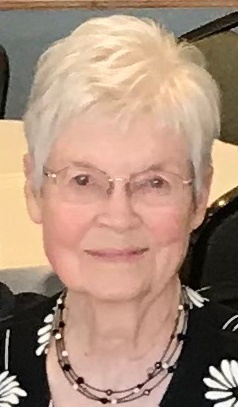 A Celebration of Life will be at 11 a.m. Saturday, February 29, at the Dugan-Kramer Funeral Home in Scottsbluff, NE with Dennis Kramer directing the services. Myrna’s cousin, Nancy Severin, will be officiating. A private interment will be at a later date at the Fairview Cemetery in Scottsbluff, NE. Memorials may be sent in Myrna’s name to The Morrison Cancer Center at Mary Lanning Healthcare, 741 North Denver Avenue, Hastings, NE 68901.

She was born May 12, 1931, in Scottsbluff, NE to Opal and Clarence Schaeffler. Myrna’s father, Clarence Schaeffler, passed away when Myrna was an infant. Her mother, Opal married Adolf Martischewsky when Myrna was one year old. She graduated from Scottsbluff High School and was a proud member of the class of 1949, the “49ers.” She married Richard J. Kramer on February 21, 1951.

A beloved mother, she is survived by daughter, Sheryl (Bruce) Cutright of Hastings, NE and sons, Stan (Jeanie) Kramer and Jerry Kramer of Portland, OR. She is also survived by a sister, Thais Johnson, of Mesa, AZ and a brother Burdette Martischewsky of Casa Grande, AZ.

To order memorial trees or send flowers to the family in memory of Myrna Kramer, please visit our flower store.