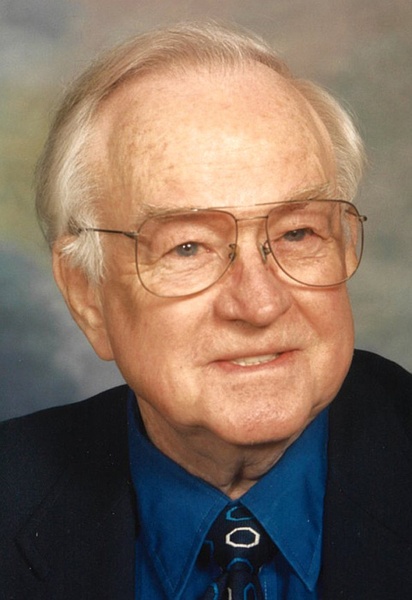 Norris was the owner of Swan’s Furniture in Hastings and numerous other towns in Nebraska, Iowa, and Kansas. After selling the stores in 1972, he went on to support local causes and was a pillar in the Hastings community.

He was born on January 13, 1921, in Upland, Nebraska, to Harold Winifred Swan and Lillian Volk Swan. Norris was raised in Kearney. He attended Kearney State Teacher’s College at age 16 in 1937; transferred to The University of Nebraska in Lincoln in 1939; began medical school at The University of Nebraska in Omaha in 1940 and then joined the Army as a medic. In college, he was a member of Phi Psi fraternity.

During World War II, before his basic training was finished, he was transferred to Walter Reed Hospital in Washington D.C. where he worked as a laboratory technician and managed 120 med techs. He was selected for Officer Candidate School and transferred to Fort Lewis in Washington state. At Fort Lewis, he worked in the Army Hospital and on Army trains caring for injured soldiers. In 1945 he left the Army as a Lieutenant.

He returned to Nebraska and began working in his family business, Swan’s Furniture.  Over the years, there were stores in 12 localities; seven in Nebraska, two in Iowa and three in Kansas. He moved to Hastings to manage that store. He would attend furniture markets in Chicago and High Point, N.C., working with his father and brother Harold on managing the rest of the stores.

In 1950 he met the love of his life, Joan Titus of Holdrege. They dated for two years and were married in Holdrege and started their life together in Hastings. They had three children, Shellea, Harold Titus, and Karen. They were married nearly 65 years until Joan’s death in 2017.

In the late 1960s, an article in the Omaha World-Herald announced that the British Mensa Organization for genius’s was forming a group in the United States. Joan encouraged Norris to apply. He was admitted. He is also a member of Intertel, a 99% society as opposed to Mensa’s 98% and the Triple Nine Society where you must test with an IQ at or above the 99.9% of the human population. In Norris’s final days he was still reading his Mensa and Intertel publication.

Norris was a pilot keeping his plane at the Hastings Airport. He was an avid golfer, member of Meadowbrook Country Club, and founding member of Lochland Country Club. He belongs to First Presbyterian Church of Hastings and was active on the design committee with his wife Joan.

He retired in the early ’70s but kept his interest in Swan’s Furniture and his philanthropic endeavors. He and Joan were avid travelers and enjoyed playing bridge. As an enthusiastic Nebraska Cornhusker fan, Norris was an early member of The Champion’s Club. Although he hasn’t attended a game for several years, he dressed from head to toe in Husker gear and watched the games from his home.

A Celebration of Life will be held on Monday, September 6, from 4 to 8 p.m. at Lochland Country Club, Hastings, NE. In lieu of flowers, memorials are suggested to The Hastings Community Foundation or donor’s choice.

To order memorial trees or send flowers to the family in memory of Norris Swan, please visit our flower store.