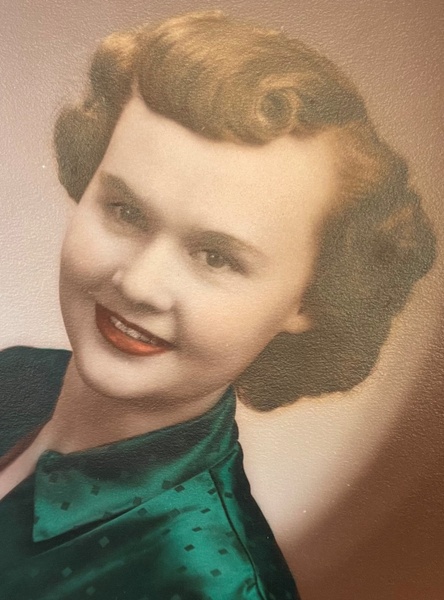 Services will be 11 a.m. Friday, January 7, at Butler Volland Chapel in Hastings with Pastor Jay Towell officiating. Burial will be at Parkview Cemetery in Hastings. Visitation will be 10:30-11 a.m. Friday at the funeral home. Memorials may be given to Hastings Family YMCA or Hastings Public Schools Foundation for the Lincoln Elementary School Library. The service will be live-streamed on Livingston Butler Volland Funeral Home’s website. To view the service you will need to go to Phyllis’ obituary and click the play button shown towards the bottom of the page.

Phyllis was raised and worked on a farm near Hansen, NE. Growing up during the depression her family was very poor but they were extremely close and remained so for their entire lives. The family was very involved in church activities and she would play the piano at church. She was a good student, a hard worker, and was employed as an office worker while attending high school. Phyllis graduated from Hastings Senior High in 1946 and began working for Kansas Nebraska Gas Company.

Phyllis met the love of her life, Floyd Marian, on a blind date arranged for by friends. They were married on March 19, 1950. They eventually moved to Petersburg, NE, and then to Oshkosh, NE where she was a supportive school administrator’s wife while also raising two children. In 1968 the family returned to Hastings to be closer to family.  Phyllis had a life-long interest in literature and reading to children. She became employed as a librarian’s assistant at Watson and then Lincoln Elementary Schools where the students called her ‘Mrs. Marian The Librarian’. After retiring she became involved in numerous volunteer activities. She and Floyd also became members of the Hastings YMCA where they participated in many older adult activities.

Phyllis instilled a love of reading in her children and grandchildren and was always finding ways to enrich their lives through books and creative pursuits. Phyllis was a fantastic cook. Every family member could probably name their favorite but one dish we could all agree upon was her delicious mac and cheese followed by deviled eggs. She also enjoyed gardening and loved flowers.

People who were blessed to know Phyllis found a kind, generous person with a smile and voice that just drew a person in and made you feel welcome and important. She was greatly loved as a wonderful wife, mother, grandmother, great grandmother, sister, and friend.

The family would like to express their sincere appreciation to the wonderful caring staff at The Kensington and AseraCare.

She was preceded by her parents, Cliff and Grace McWhirter; sisters, Myrna and her husband, Vernon Saulter and Beverly and her husband, Loran Quandt; brothers, Robert McWhirter, LaVern McWhirter and his wife, Norma; and Gib McWhirter; brother-in-law, Allen Schukei and son-in-law, Quigg Fenn; and many other close friends and relatives.

To order memorial trees or send flowers to the family in memory of Phyllis Marian, please visit our flower store.