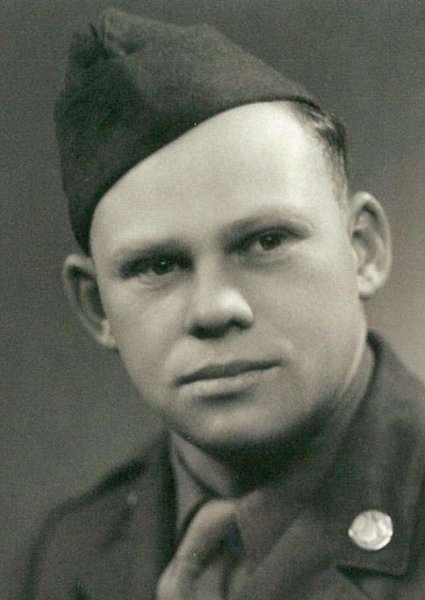 Services are 10:30 a.m. Monday, August 5, at Grace United Methodist Church in Hastings with Rev. Tamara Holtz and Rev. Dr. Lee R. Wigert officiating. Burial with military rites by Hastings Military Honor Guard will be in Parkview Cemetery in Hastings. In lieu of flowers, memorials may be given to Hastings Military Honor Guard or Juvenile Diabetes Research Foundation in honor of Mollie Kubicka, great-great-niece of Raymond. Mollie was diagnosed with juvenile diabetes at the age of two and now uses an insulin pump. Visitation will be 1-5 p.m. Sunday at the funeral home, and one hour prior to service at the church.

Raymond was born to George and Anna Elizabeth “Alice” (Schreiner) Rutt on February 12, 1918, the youngest of 14 children. He was born on the family farm one mile west of Campbell, NE. Raymond was baptized by Reverend H.J. Potgeter on March 16, 1919. He was confirmed in the German Presbyterian Church, later called the Westminster Presbyterian Church in Campbell, NE by Reverend Herman G. Blaschke on July 7, 1935. Raymond attended the Campbell School through the 10 th grade.

Private 1 st Class Raymond Rutt served in the United States Army from December 28, 1942 to January 13, 1946. He served in the European Theatre-France, England, Belgium, and Normandy Northern Frances and Rhineland. He served with the 3820 Quartermaster Gas Supply Company as a truck driver. Raymond helped make the landing on Omaha Beach at Normandy in France. He received the Good Conduct Medal, Distinguished Unit Badge, Bronze Service Arrowhead, and Carbine Marksman.

When Raymond returned from the war he worked in Lexington for Luther-Rutt Gravel Pit pumping gravel and ran a corn picker for Luther. On August 9, 1947, Raymond married Kathryn Elizabeth Mohrlang. They lived in Broken Bow and ran a Grade A Dairy in partnership with Dan Thomas. They moved to Mason City to form a partnership with Buss Luther and run a Herford Ranch.

In 1958 Raymond and Kathryn moved back to Hastings where Raymond did custom work. Raymond joined the New York Avenue Congregational Church on April 19, 1959. Raymond worked from 1958-1968 for the Hastings Street Department running the street sweeper. In 1968 he put in the grass for the Adams Central football field. In 1969 Raymond started his own business putting in lawns, “Rutt’s Lawn and Garden Service.” Raymond retired in 1981. He was head usher and Deacon in his church for over 30 years. Raymond was a lifetime member of the Veterans of Foreign Wars. He was a member of the American Historical Society of German’s of Russia and the New York Avenue Congregational United Church of Christ.

Left to cherish his memory are numerous nieces, nephews, and cousins with whom he and Kathryn always maintained an active interest in as well as his many friends including special friend, Mildred Lemke of Superior, NE.

To order memorial trees or send flowers to the family in memory of Raymond "Ray" Rutt, please visit our flower store.