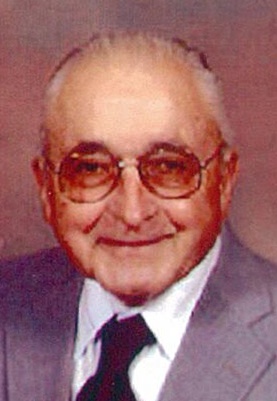 Services are 10:30 a.m. Friday, January 17, at Butler Volland Chapel in Hastings with Rev. Greg Allen-Pickett officiating. Burial with military rites by Hastings Military Honor Guard will be at Parkview Cemetery in Hastings. Visitation is 6-8 p.m. Thursday with family present, and one hour prior to service at the funeral home. Memorials may be given to the Hastings First Presbyterian Church, the Disabled American Veterans in Hastings or Parkinson’s Charity/Michael J. Fox Foundation.

Richard was born on a farm two miles east of Edholm, NE in Butler County to Anton and Josephine Viglicky. He was the second of four children. Richard, as well as his siblings and father, attended District 10 country school. On February 2, 1943, he joined the Army and took training in California at Camp Irwin and Camp Haan. He was shipped to England aboard the Queen Elizabeth. He had additional training in England until the invasion. He participated in campaigns in Northern France, Ardennes, Rhineland and Central Europe. He was discharged on January 12, 1946, and joined the reserves for three years. He married Evelyn Dolezal on April 16, 1947, and worked for Picket Buick in Schuyler. They moved with Picket Buick to Hastings in 1957. He continued to work for JC Pickett Buick, Fred Spady Motors and Paul Spady Motors as an auto body man and body shop manager until retiring. Richard loved polka dancing, woodworking and traveling.

To order memorial trees or send flowers to the family in memory of Richard Viglicky, please visit our flower store.