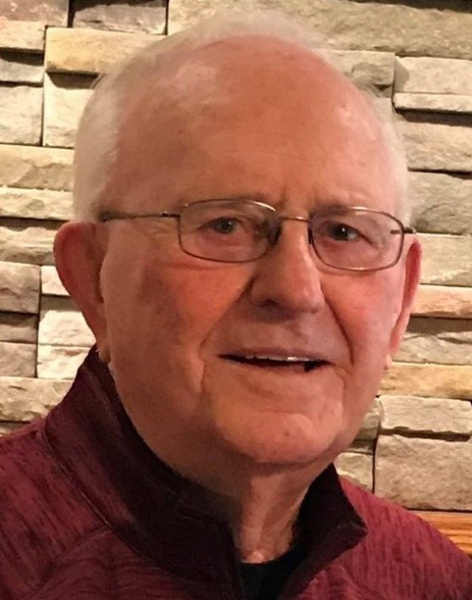 Rosary is 6:30 p.m. Friday, July 24, at Butler Volland Chapel. Mass of Christian Burial is 10 a.m. Saturday, July 25, at St. Michael’s Catholic Church in Hastings with Father Thomas Brouillette officiating. Mass will be live-streamed on Livingston Butler Volland Funeral Home Facebook page for those who are unable to attend in person. Burial with military rites by Hastings Military Honor Guard will be at Parkview Cemetery in Hastings. Visitation is 1-6:30 p.m. Friday with family present 5-6:30 p.m. at the funeral home, and one hour prior to service at the church. Memorials may be given to St. Michael’s Catholic Church or Hope Lodge in Omaha. Since there are material sharing restrictions, we ask that you bring your own pen for signing the registration book or memorial envelopes. If you do not bring one, we can do that for you. We ask that you do your best to maintain social distancing.

Dick was born on February 23, 1933, in Hastings, NE to B.G. and Alma Davey, the youngest of three sons. He grew up in Hastings and graduated from St. Cecilia Catholic High School in 1951. He attended Hastings College until he was drafted into the Army.  Dick served in Korea from March 1953 to January 1955.

Dick married his high school sweetheart, Mavis Mahoney, on February 12, 1955. They had two daughters, Nancy and Denise. He worked for Burlington Railroad, Consolidated Motor Freight, P.I.E. Nationwide, and Industrial Irrigation. He was a member of the Knights of Columbus, Elks Lodge, Elks Country Club, and Disabled American Veterans and was an acolyte and lector for St. Michael’s Catholic Church.

Dick was an avid sports fan throughout his life. He played Legion baseball, basketball, and football in high school and was a lifelong Huskers fan. He and Mavis were loyal fans to both St. Cecilia High School and Hastings College sports and often traveled to cheer on their teams. He also enjoyed attending and following the many sports and activities of his daughters, grandchildren, and great-grandchildren throughout the years. In true Dick fashion, he developed many friendships along the way.

Dick’s favorite pastime was golf. He always said he wanted to play until he matched his wife’s hole-in-one. His family assumes he’s already working on that goal up in heaven!

Dick was baptized into the Catholic faith and continued that practice throughout his life. He courageously fought his battle with cancer. Because of his faith, he was ready to go home to his Heavenly Father.

Through it all, he never lost the quick wit personality everyone loved. He touched many lives and was cherished by those who knew him as a loving husband, proud Dad, wonderful Papa, and dedicated friend.

Dick was preceded in death by his parents; two brothers, Robert (Ellen) Davey and Wilford Davey; and sister-in-law and her husband, Diane and Loras Baumhover.

To order memorial trees or send flowers to the family in memory of Richard "Dick" Davey, please visit our flower store.