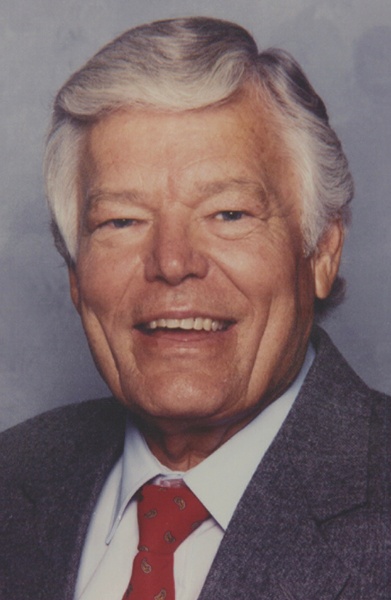 Private family memorial service will be held at First Presbyterian Church in Hastings with Rev. Greg Allen-Pickett officiating. Private family inurnment will be at Parkview Cemetery in Hastings at a later date. Book signing will be 9 a.m. – 5 p.m. Tuesday at the funeral home. In lieu of flowers, memorials may be given to the Hastings Community Foundation where they will be distributed to various worthwhile causes important to Robert.

Robert, “Van The Man” or “Grink Gronk” as he was affectionately named by his grandson, Justin, was born on December 29, 1924, in North Platte, NE. He graduated from North Platte Senior High School in 1943. He proudly enlisted in the U.S. Army Air Corps Aviation Cadet Program and served from July 6, 1943-March 22, 1945 while attending Butler University in 1943, where he later graduated. During his pilot training in Houston, TX, the acting General asked he and others in the program to begin navigator training too, as that was the area of greatest need at that time. He earned his wings and often spoke of his time in the service with great pride and affection.

At the end of World War II, Robert became a Federal Airway Traffic Controller in Sioux City, IA. On August 31, 1946, Robert married Dorothy Loncar of North Platte, NE in Sioux City. Robert was then transferred to the Airway Traffic Control Center in St.Louis, MO. Daughter, Pamela Jean was born in St. Louis on August 15, 1947. Upon returning to North Platte, Robert worked for the J.L. Kraft Foods Company for 14 years where he was named King of Kraft Foods in Minneapolis, MN and met J.L. Kraft. While at Kraft, he sold the largest piece of cheese in the world at the time; an 11,500 lb Mammoth Cheddar purchased by Sixth Street Market in North Platte, NE. Those who knew Robert, know that this was a lifelong celebrated sales accomplishment for him!

In March 1962, Robert & Dorothy purchased Rhoads Exclusive Women’s Wear, a well recognized clothing boutique in North Platte that Dorothy operated until her retirement. Robert then founded R.L. VanBuskirk Clothing Brokerage, traveling throughout seven states in the Central U.S. and handling over 10 premium quality clothing lines, which he operated until his retirement. Robert was also a co-owner of Centennial Realty in North Platte and had his brokerage license.

Robert was a meticulous enthusiast of automobiles, traveling well over a million miles while on the road for business. His Cadillacs and Lincolns were always perfectly polished and maintained. His 1985 Corvette was an all-time favorite and he often told Dorothy he was buying another Vette well into his 90’s! His other loves were, dogs, cats, golfing with his close friends in North Platte and spending time socializing with his family and numerous friends.

Robert was treasured by all who knew him; his infectious laugh and smile brought joy and love to any room he entered. He would “smile with his eyes” as a close friend stated.

Robert was most fortunate to have spent his final years at the Kensington Evergreen Court where the staff and residents became his extended family. The entire staff took tremendous care of Robert and the family is forever grateful.

Robert was preceded in death by his parents, Roy & Mabel VanBuskirk; his daughter, Pamela J. Osborne; his son-in-law, John C. “Jack” Osborne; and a sister.

Robert is survived by his loving spouse of 72 years, Dorothy R. “Baba” VanBuskirk of Hastings; his grandson and spouse, Justin C. Osborne and Alison L. (Meyer) Osborne of Hastings; and three great-grandchildren, Kingzlee, Stuhrling, and Kruzann all of Hastings.

To order memorial trees or send flowers to the family in memory of Robert VanBuskirk, please visit our flower store.