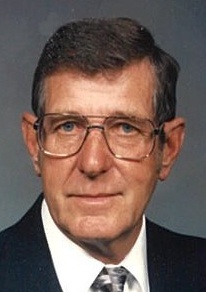 Services will be at 11 a.m. Friday, March 25, at First St. Paul’s Lutheran Church in Hastings with Chad Power officiating. Private family burial with military rites by Hastings Military Honor Guard will be at Parkview Cemetery in Hastings. Visitation will be 1-7 p.m. with family present 5-7 p.m. Thursday, March 24, at the funeral home. Marlene will not be present for the visitation. In lieu of flowers, memorials may be given to First St. Paul’s Lutheran Church or American Macular Degeneration Foundation, c/o of the family. The service will be live-streamed on Livingston Butler Volland Funeral Home’s website. To view the service go to Bob’s obituary and click the play button shown towards the bottom of the page.

Bob was born October 4, 1932, in Hastings, NE to Paul and Marie Fast. He attended Alcott Elementary School and graduated from Hastings Senior High School in 1950. In January of 1952, Bob enlisted in the U.S. Navy. After boot camp, he served aboard the USS Loeser, DE. He was honorably discharged in 1955 as a Sonarman 2 nd Class. He returned to Hastings and became a partner in the family-owned business, Fast Construction Company until it dissolved in the summer of 1981. Bob then went to work for Geist Masonry in Grand Island until his retirement in 1995.

Bob married Marlene Bresley on July 26, 1953, in her parent’s home in Ord, NE. While he was in the Navy they lived in Philadelphia, PA and Key West, FL. Upon discharge, they moved to Hastings, NE. To this union, five children were born: Jerry, Chuck, Marvin, Audrey, and Susan.

Bob enjoyed working in his yard and planting a big garden. He often picked many pears and peaches off the trees. He enjoyed sharing them with family until Oliver, the family cat, was no longer able to keep squirrels from taking a bite out of each piece of fruit.

The cabin at Johnson Lake was a special place for Bob. He enjoyed fishing, playing cards, and sharing meals with friends and family. To this day, their family still enjoys getting together at the cabin.

Bob also enjoyed vacations in the popup tent camper to the Black Hills, Colorado, and Yellowstone. When the kids were grown, Bob and Marlene made several trips to Branson, MO enjoying the shows and Christmas lights. One of their last memorable vacations was to Key West, FL, where Bob was stationed in the Navy.

Bob was a lifelong member of First St Paul’s Lutheran Church. He was baptized on December 18, 1932, and confirmed on April 14, 1946. Bob served on the church council. He was also an usher, greeter, and counter.

Bob was preceded in death by his parents; siblings and spouses, Fred and Georgia Fast, Bill and Iona Fast, and Rosemarie and Melvin Farris; and nephew, Gary Farris.

He is survived by his wife of 68 years, Marlene; his children and spouses, Jerry and Debi Fast of Kearney, Chuck and Wendy Fast of Lincoln, Marvin and Jeannette Fast of Hastings, Audrey and John Steider of Geneva, and Susan and Alan Givens of Lincoln; grandchildren, spouses, and great-grandchildren, Bryan and Jenna Fast, Emilie, Barrett and Phoebe of Kearney, Kevin and Jill Fast and James of Lincoln, Alan Fast of Durham, NC, Shannon Fast and Erica Larson of Minneapolis, MN, Aaron Fast and Kelsey Jorgensen of Portland, OR, Maggie Fast and Cole Malin and Amelia of Bellevue, Lauren Fast of Chicago, IL, Jaimie Fast and Jack Danks of Lansing, MI, Katie Fast of Oakdale, MN, Valerie and Joel Starr, Jack, Jace, John, Nora, and Evie of Gretna, David and Jessica Steider and Ella of Ulysses, Ryan and Hailey Steider and Aiden of Geneva, and Kyle Givens of Lincoln; several nieces and nephews.

To order memorial trees or send flowers to the family in memory of Robert "Bob" Fast, please visit our flower store.