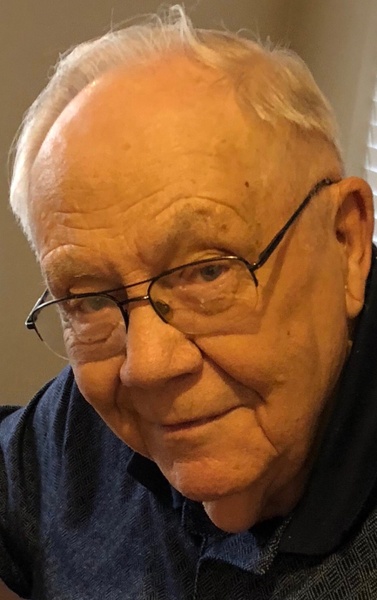 Services will be 10:30 a.m. Thursday, April 28, at Faith Lutheran Church in Hastings with Pastor Paul Dunbar officiating. Burial with military rites by Hastings Military Honor Guard will be at Parkview Cemetery in Hastings. Visitation will be 1-7 p.m. Wednesday, April 27, at the funeral home and one hour before the service at the church. Memorials may be given to Faith Lutheran Church or The Heritage at College View. The service will be live-streamed on Livingston Butler Volland Funeral Home’s website. To view the service, go to Bob’s obituary and click the play button shown towards the bottom of the page.

Bob was born October 7, 1928, at home in Roseland, NE to Robert Henry and Frieda (Ziebarth) Hohlfeld. He was baptized and confirmed at Wanda Lutheran Church. Bob graduated from Roseland High School in 1946. He served in the U.S. Air Force from September 1950 to September 1953 where he was a supply inspector stationed at the Manston Airbase in England and was in the inactive reserves for six years after that. Bob married LaDonna Krueckeberg on March 6, 1951; she preceded him in death on January 2, 2017.

Bob and LaDonna settled in Glenvil, NE after his military duty and then moved to the family farm in Roseland. He farmed in the area for many years, retiring and moving to Hastings in 1999. Bob was a board member for Glenwood Telephone for 18 years, President of Roseland CO-OP for nine years, and a member of the American Legion Honor Guard in Juniata. He was a member of Faith Lutheran Church and held numerous offices at Wanda Lutheran Church.

Bob was preceded in death by his parents; wife, LaDonna Hohlfeld; and daughter-in-law, Kathi Hohlfeld.

To order memorial trees or send flowers to the family in memory of Robert "Bob" Hohlfeld, please visit our flower store.