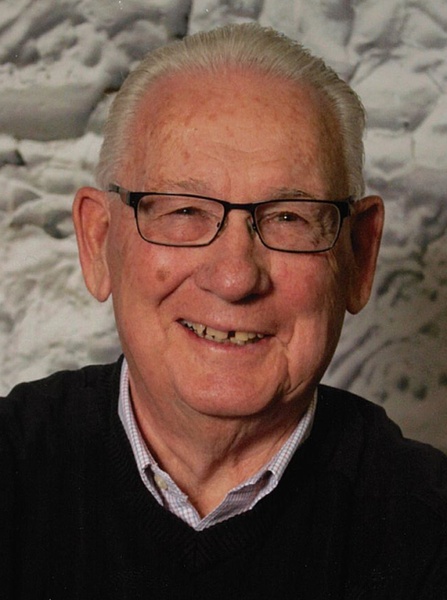 Memorial Services are 10 a.m. Friday, July 17, at Faith Lutheran Church in Hastings with Pastor Paul Dunbar officiating. Burial will be at Parkview Cemetery in Hastings. Visitation will be 2-7 p.m. Thursday with family present 5-7 p.m. at the funeral home, and one hour prior to service at the church. Memorials may be given to Start Over Rover or Faith Lutheran Church “Hope Fund.” Since there are material sharing restrictions, we ask that you bring your own pen for signing the registration book or memorial envelopes. If you do not bring one, we can do that for you.

Rod was born September 19, 1940, to Leona (Heggemeyer) and LeRoy Hansen in Battle Creek, NE, at home. He grew up there as the youngest of five siblings, graduating from Battle Creek High School in 1958. He then attended the University of Nebraska-Lincoln, graduating in 1963 with a B.A. in Journalism.

Rod built his career around public relations and communications. As a child he was an enthusiastic fan of the Brooklyn Dodgers, and became an avid Huskers fan; thus, he was pleased to start his career as a sports editor at the Grand Island Independent immediately after graduating. While working there, he met Kathryn A. Christensen, who grew up in Grand Island and regularly returned there from college in Colorado. They were married on February 28, 1965, not long after Rod took a job for the Chamber of Commerce of Greater Kansas City. The newlyweds lived in Overland Park for about two years before moving to Lincoln, where Rod worked as Public Information Director for the newly formed Nebraska Department of Economic Development. They have three children, Steven E., Shelly K., and Scott L.

In 1971, Rod began working in public relations for KN Energy, Inc., now Kinder-Morgan. The Hansens lived in Scottsbluff, then moved to Hastings in 1974. The family joined Faith Lutheran Church and soon became active members of the family of Faith. As Steve, Shelly, and Scott grew up, Rod supported them throughout their school activities, whether it be coaching baseball, driving early in the morning to a track meet, or standing at the two-mile marker of a cross country course with a camera, a smile and the encouraging words “You can do this!”

After 24 years, Rod retired from KN Energy and later began working for David and Associates as a copywriter. In 1997, he began working as Assistant Director for the Central Community College Foundation, as well as working half-time with the Nebraska Manufacturing Extension Partnership through CCC. He continued in these positions for a decade before retirement.

Rod was well-respected throughout Hastings, known for his laughter and generosity, and was involved in many activities over the years. He participated in many activities at Faith Lutheran Church, including serving on a number of committees and singing bass in the choir. He enjoyed golf and was a long-time member of the Hastings Elks Club. When the Hastings Elks Club moved to a new site, he supported the building of the new golf course, helping clear trees and offering golf-cart tours of the progress to anyone interested. After retiring, he became a regular volunteer at Start Over Rover animal shelter, along with Kathy. Rod and Kathy celebrated 50 years of marriage in 2015.

Rod was preceded in death by his parents; two sisters, Janice Fleugel and husband Babe and Avis Walrod and husband Charles.

Rod is survived by his wife, Kathy; children, Steve and wife, Linda, of Lincoln, Shelly and husband Ty Haller, of Ceresco, and Scott of Hastings; siblings, Stan Hansen and wife, Ruby, of Princeton, MN, and Kenny Hansen and wife, Fran, of Peoria, AZ; many nieces and nephews; grandchildren, Samantha Haller and Tyson Haller, both of Lincoln, and Jaunice Mullen and Tanisha Mullen, both of Hastings; and great-grandchildren, Owen and Drake; Izaiah and KiAunnah; and Albie Jane.

To order memorial trees or send flowers to the family in memory of Rodney "Rod" Hansen, please visit our flower store.