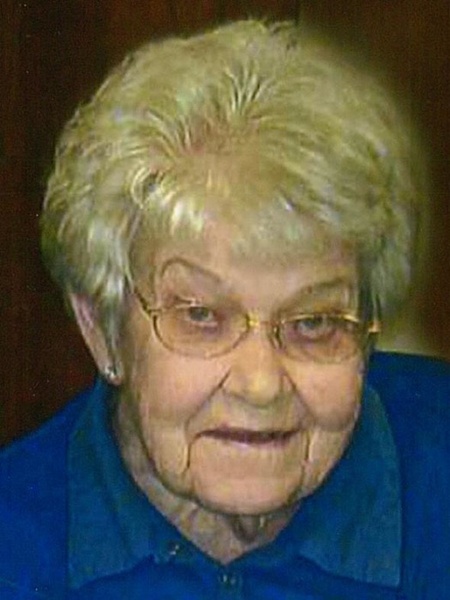 Rosemarie Farris, 93, a lifetime Hastings resident, died Sunday, June 23, 2019, at Mary Lanning Healthcare where she had been a patient for one week.

Services are 10:30 a.m. Thursday, June 27, at Butler Volland Chapel in Hastings with Rev. Mark Farris officiating. Burial will be held at Parkview Cemetery in Hastings. Visitation is 1-5 p.m. Wednesday, and one hour prior to service at the funeral home. Memorials may be given to First St. Paul’s Lutheran Church in Hastings.

Rosemarie was born January 4, 1926, in Clay Center, NE, to Paul and Marie (Kohnke) Fast, who had immigrated from Germany in 1925. The family arrived in Clay Center and later settled in Hastings. Rosemarie was a 1943 graduate of Hastings High School. She received a teaching certificate after attending Hastings College and taught school for one year at Harvard, NE.

She met her future husband, Melvin W. Farris, on New Year's Eve 1943 at a dance at Hastings College to which servicemen were invited. The couple married after the end of World War II, on September 1, 1946, at Rosemarie's family home in Hastings.

Rosemarie was a homemaker and mother to four sons - Melvin Dewayne, James Paul (Jim), Garrell Lynn (Gary) and Mark Alan. She was hardworking and industrious. In addition to attending to her well-kept house, she enjoyed several hobbies including genealogy, quilting, cross-stitching, puzzles, and flower gardening. She created numerous beautiful and well-crafted quilts which grace the homes of family members.

Rosemarie was a lifetime member of First St. Paul's Lutheran Church in Hastings and professed faith in Christ Jesus as her savior, understanding that salvation was a gift of grace, by faith. She taught Sunday school, was involved in women's ministries and served on the funeral committee.

Melvin was diagnosed with Parkinson's disease in 1982. After he moved to Good Samaritan Village in 1994, Rosemarie faithfully spent hours with Melvin each day at the nursing home, being his constant companion until his death in 1999.

Rosemarie was preceded in death by her parents; husband, Melvin; son, Gary; and two brothers, Fred and Bill.

To order memorial trees or send flowers to the family in memory of Rosemarie Farris, please visit our flower store.