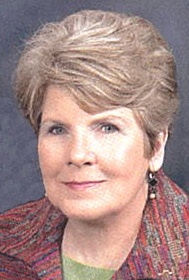 Rosary will be 9:30 a.m. and Mass of Christian Burial will follow at 10 a.m. Thursday, May 19, at St. Cecilia Catholic Church in Hastings with Father Thomas Brouillette officiating. Burial will be at Parkview Cemetery in Hastings. There will be no viewing or visitation. Memorials may be given to Friend Family Academic Scholarship at Hastings College. The service will be live-streamed on Livingston Butler Volland Funeral Home’s website. To view the service, go to Sandra’s obituary and click the play button shown towards the bottom of the page.

Sandra was born on February 5, 1941, to Robert and Dorothy Sampey in Tulsa, OK. She was raised by her grandmother Pearl Sampey in Springfield, MO. In 1960, Sandra was a finalist for the Miss America pageant in Missouri, representing the city of Springfield. After graduating high school, she attended Drury College and received her diploma from Burge School of Nursing in Springfield. It was during a nursing school rotation in Hastings that she met Richard “Dick” Friend. They were united in marriage on April 28, 1962, at Saint Agnes Cathedral in Springfield.

During her first years in Hastings, Sandra worked as an emergency room nurse at Mary Lanning Hospital and then later as a pediatric nurse for Dr. Robert McIntire. Sandra returned to school and received a Bachelor's degree in Psychology from Hastings College in 1988. She was a member of Psi Chi and Alpha Chi Academic Honor Societies. After receiving her degree, she worked for the Educational Service Unit as a rural school nurse for many years.

Sandra was very active in her daughters’ activities. She served as Chairman of the local Girl Scouts of America chapter and contributed to the Hastings Aquatic program, spending countless hours driving kids to and working at swim meets. She later actively supported the Hastings Tigers Booster Club. Sandra also served on the boards of the Hastings YWCA and her beloved Ladies Golf League at Lochland Country Club, where she once hit a hole in one. As her late husband noted, “she had an absolutely beautiful golf swing, it’s a shame she only cared about the fresh air”. She was an avid bridge player and enjoyed celebrating monthly with her Ladies’ Birthday Club. Sandra was initiated into her P.E.O. Chapter (GZ) in 1994 and served as chapter president from 2002 to 2004.

Sandra showed an unwavering love for her husband, daughters, and especially her grandchildren. She was a beautiful wife, mother, and grandmother who will be greatly missed.

To order memorial trees or send flowers to the family in memory of Sandra Friend, please visit our flower store.