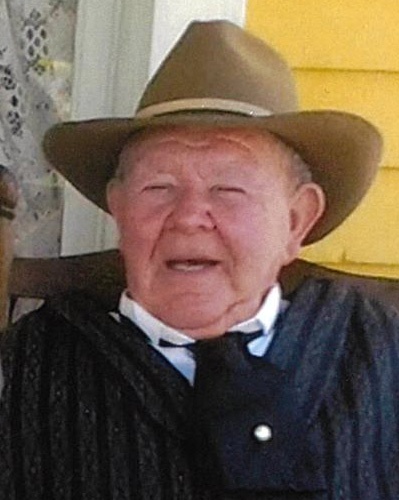 Services will be 2 p.m. Thursday, February 11, at First United Methodist Church in Harvard, NE, with Pastor Dave Johnson officiating. Burial will be at the Harvard Cemetery. Visitation will be 1-7 p.m. Wednesday with family present 4-7 p.m. at the funeral home and one hour prior to services at the church. Memorials may be given to the family to be designated at a later date. The service will be live-streamed on Livingston Butler Volland Funeral Home’s Facebook page. The direct link for that page is www.facebook.com/lbvfh . For the health and safety of others face masks are required for those attending the visitation and funeral, your cooperation is appreciated. Since there are material sharing restrictions, we ask that you bring your own pen for signing the registration book or memorial envelopes.

Ed was born on July 7, 1938, to Charles and Inza (Bartlett) Searle in Mariaville, NE, Rock County. When he was five they moved to Harvard where he received his education.

He married Mary Ann Krause on August 11, 1963, in Sutton. To this union, they were blessed with three children, Wrenda, Jason, and Amanda.

Ed spent many years farming for Kreutz Bros. In his spare time he moved three houses to Harvard, fixing them up, one to live in, and two for rentals. He was a hard worker and had the ability to build many things with metal or wood. He enjoyed raising cattle for many years. In later years he bought his own semi-truck, hauling grain locally until his retirement.

He was well known for his storytelling, some true and some maybe stretching the truth. He was also known for his sense of humor and telling jokes. He loved country music and had the ability to yodel which we all enjoyed to listen to. He also didn’t know a stranger, he could strike up a conversation with anyone.

He enjoyed spending time with his family camping, boating, jet skiing, and attending the grandkids sporting events at Sandy Creek and Liberty, MO. Traveling with Mary Ann was also a favorite activity, as they went on many different tours. He was a member of the First United Methodist Church in Harvard.

He is survived by his wife, Mary Ann; children, Wrenda of Murrieta, CA, Jason and Brenda of Edgar, Amanda and Tony Renfro of Liberty, MO; grandchildren, Logan Searle and fiance Kami Hall of Kansas City, MO, Luke Searle of Kearney, Jocelyn and Jaxson Renfro of Liberty, MO; sisters, Vera Smith of Hastings and Erma Simmons of Sutton; also nieces, nephews, and many cousins. His special friend and buddy was Gary Williams. He was preceded in death by his parents and his sister, Twila.

To order memorial trees or send flowers to the family in memory of Ted "Ed" Searle, please visit our flower store.