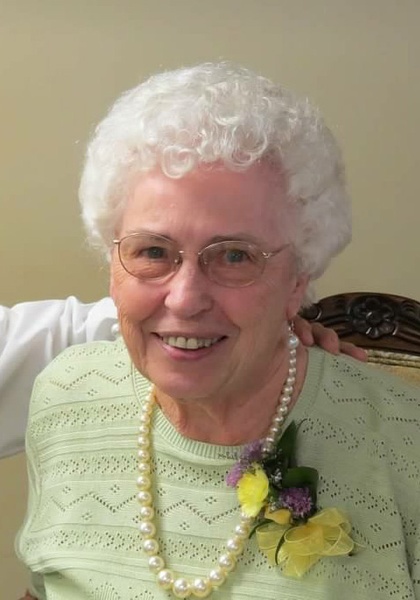 SERVICE TIME HAS BEEN CHANGED TO 2 PM WEDNESDAY, JANUARY 27TH DUE TO THE WEATHER/ROAD CONDITIONS.

Theresa was born June 9, 1931, in Lawrence NE to Norbert and Beatrice (Pohlmeier) Rempe.  When she was just 8 years her father suddenly passed away.   Several years later her mother married Clarence Jurgensmeier, who loved and raised Theresa and her brothers as his own.

Theresa graduated from Lawrence High School.  At a dance in Lawrence she met the love of her life, James (Jim) Schneider.  They were married June 25, 1952 at Sacred Heart Catholic Church in Lawrence, NE.  They were true partners in life and modelled their vows throughout their 68 years of marriage.

Theresa and Jim made their home in Hastings NE, where they raised their 6 children.  Until the very youngest was in school, Theresa was a homemaker.  She was a talented cook, a great organizer, a lover of games and puzzles, and a genuinely kind person.  Family gatherings, family camping trips, card club, and gardening were a few of her many hobbies.  When her youngest son began school, she started working at Crosier Monastery, where she remained for 23 years.  The Crosier fathers and brothers became extended members of her family.

Theresa suffered a stroke at the age of 67, but she did not let it stop her from enjoying her family, cards, and people.  She became friends with everyone she came in contact with.  Her warmth and smile were some of her greatest qualities, and they will be greatly missed.

Theresa was a member of St. Cecilia Catholic Church, Altar Society, Catholic Daughters of the Americas, and the American Legion Auxiliary.  She was preceded in death by her parents, son Mick Schneider, brothers Don Jurgensmeier and Bro. Herbert Rempe.

Visitation from 1-7 on Tuesday, Jan 26 at Livingston Butler Volland Funeral Home.  Rosary will be at 2 pm Wednesday, January 27, at St. Cecilia Catholic Church with Mass of Christian Burial to follow with Fr. Christopher Kubat and Fr. Thomas Brouillette officiating.  Theresa’s favorite color was blue.  If you so choose, wear a touch of blue in her memory.  Burial will be at Parkview Cemetery in Hastings.  The service will be live-streamed on Livingston Butler Volland Funeral Home’s Facebook page. www.facebook.com/lbvfh Memorials may be given to St. Cecilia Catholic Church or Hastings Catholic Schools.

For the health and safety of others, face masks are required for those attending the visitation and funeral, your cooperation is appreciated.  Since there are material sharing restrictions, we ask that you bring your own pen for signing the registration book or memorial envelopes.

To order memorial trees or send flowers to the family in memory of Theresa Schneider, please visit our flower store.