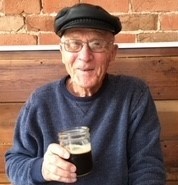 Services will be Friday at Butler Volland Chapel at 10:30 a.m. with Chaplain John Mueller officiating. Burial with military rites by Hastings Military Honor Guard will be at Juniata Cemetery. Visitation will be from 9:30 a.m. to 10:30 a.m. Friday with family present at the funeral home. Memorials may be given to Hastings College.

Vernon was born March 3, 1930, in rural Clay County, NE to Edwin E. & Lillian G. (Carpenter) Cook. He was the third of four children and spent most of his youth in Clay County before the family moved to a modern farm in Adams County in 1946. He liked to recount how they had no electricity, telephone, or indoor plumbing for the first 16 years of his life. He graduated from Hastings High School in 1948 and served two years in the US Army during the Korean War, at which time he was stationed in Japan. Vernon married Phyllis Joanne Howland on June 6, 1954, and to that union were born 4 children: Vernon Jr, Laurie, Vincent, and Tim.

Vernon was a kind, generous, and extremely hard-working man. He loved his family, his friends, and his life as a farmer. He was a 4 th generation Nebraska farmer, the descendant of homesteaders, and was actively involved in the family farming operations until well into his eighth decade. He was honored as the Jaycees Outstanding Young Farmer of the Year in 1962.

Vernon was preceded in death by his parents, sister Vivian Mundorff, brother Kenneth, and father- and mother-in-law, Kenneth & Vivian Howland.

To order memorial trees or send flowers to the family in memory of Vernon Cook, please visit our flower store.