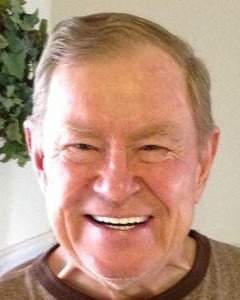 Memorial Services will be 10:30 a.m. Thursday, November 17, at Butler Volland Chapel in Hastings with Chaplain John Mueller officiating. Burial will be at Parkview Cemetery. A book signing will be 8 a.m. – 4:30 p.m. Wednesday, November 16, and one hour before the service at the funeral home. Memorials may be given to the family for a memorial to be established at a later date. The service will be live-streamed on Livingston Butler Volland Funeral Home’s website. To view the service, go to Victor’s obituary and click the play button shown towards the bottom of the page.

Victor was born August 24, 1938, in Hastings, NE to Fred and Mabel (Denton) Spady. He attended Hastings High School and graduated from the U.S. Armed Forces Institute in 1956, and the U.S. Naval Training Center in Great Lakes, IL. He served in the U.S. Navy on the USS Valley Forge.

He married Sharon K. Johnson on October 2, 1959, and were married for 63 years. Victor owned and operated Vic Spady Motors in Hastings and Ord, NE for many years. He attended Second Presbyterian Church, and over the years enjoyed collecting cars, fishing, boating, horse races, Nebraska football, retirement in Florida, and the ocean.

Victor was preceded in death by his parents, Fred and Mabel Spady; and brothers, Bob Spady and Paul Spady.

To order memorial trees or send flowers to the family in memory of Victor Spady, please visit our flower store.