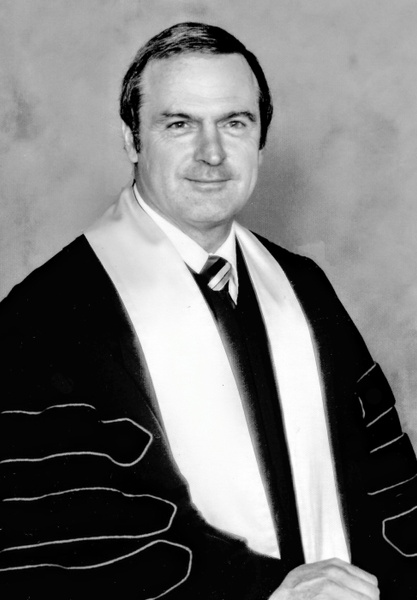 With great sorrow and bittersweet joy, we said goodbye to The Reverend Doctor Warthen Talmadge Israel on October 5, 2020. “Bud” was called home to be with his beloved wife Anna Belle by the Lord whom he had served so long and faithfully. He loved God’s Creation unconditionally (Agape Love) and influenced many lives over the course of his life and ministry with his message of hope and promise. He coined the word “possibilitarian”, a person who always looked at the possibilities in life.

Warthen T. Israel was born January 30, 1932, in Tampa, Florida, to Travis and Sarah (Long) Israel. When he was three, his parents moved to Albany, Georgia, where Buddy (as he was known to family and friends) lived until he went to Chicago to attend Chicago Evangelistic Institute (CEI).  In 1951 the school (renamed Vennard College in 1959) was moved to University Park, Iowa.

There, he met Anna Belle Louthan. He always delighted in retelling the first time he saw Ann and, turning to his friend, said, “I’m going to marry that girl.” They were married in the Methodist church in Randolph, Nebraska, on August 9, 1952. Bud completed his studies at CEI and William Penn College while serving as pastor at a small church in rural Iowa. In 1953 Bud and Ann’s first child Stephen was born in Oskaloosa, Iowa. In 1954 Bud and Ann began service in the Salvation Army. Their second child David was born in Waterloo, Iowa, in 1955. Bud was accepted into the Methodist Church ministry in 1956 and was assigned to the Palmer, Nebraska, church. Deborah, their third child, was born in St. Paul, Nebraska, in 1958. While in Palmer, Bud attended seminary at Iliff School of Theology in Denver, Colorado. He commuted by train weekly while also guiding the church during a building campaign.

Bud was senior pastor at the Cozad, Nebraska, United Methodist Church from 1971-1977 when he founded and directed junior and senior high Bible camps at Camp Comeca. The Cozad Thrift Shop, a church-sponsored entity envisioned and initiated by Bud during his ministry in Cozad is an enduring legacy still serving the community today.

In 1977, Bud and Ann moved to Grand Island, Nebraska, when Bud was appointed as District Superintendent for the South Central District of the United Methodist Church. On June 3, 1980, the Grand Island tornado struck and their home was severely damaged. Throughout the rebuilding, Bud continued to serve the churches of his district. Bud wrote his doctoral thesis on Alcoholism in the United Methodist Clergy and earned his Doctor of Ministry in 1981 from San Francisco Theological Seminary. He was frequently asked to lecture on college campuses for alcohol treatment programs.

From 1981 to 1987 Bud was senior pastor to the Hastings, Nebraska, First United Methodist Church. He initiated a membership and building campaign to reinvigorate and renovate the church. In 1984 he was presented with the Distinguished Alumni Award from Vennard College.

In 1987 Bud was inaugurated as President of Vennard College. During his tenure the school thrived with an increase in enrollment and revenues.

He returned to the Nebraska Conference with the United Methodist Churches in Sargent (1992) and Gretna (1994). During his time in Gretna he again led a church building campaign.

Bud retired in 1998 and moved to Hastings, serving as a part-time pastor of Second Presbyterian Church. In 2015 Bud and Ann moved to Plantation, Florida, where they loved life at their home by a lake.

A private family memorial service will be held on Nov. 13, 2020, at First United Methodist Church in Hastings, Nebraska. The family hopes to observe a public Celebration of Life Service in the future.  Memorials may be given to the Rev. Dr. Warthen Talmadge Israel Memorial Fund to be established at a later date, c/o Butler Volland Funeral Home, 1225 N. Elm Ave., Hastings, NE 68901.

To order memorial trees or send flowers to the family in memory of Warthen Israel, please visit our flower store.