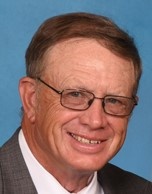 Celebration of life will be Friday, March 11, at 11:00 a.m., at Faith Lutheran Church in Hastings with Pastor Paul Dunbar and Pastor Josh Davis officiating. Burial will be at 2:00 p.m. at Parkview Cemetery in Hastings. Visitation will be Thursday, March 10, 1-8 p.m. with family present from 5-7 p.m. Memorials may be given to Faith Lutheran Church, Faith Lutheran Laymen’s League, or Orphan Grain Train. The service will be live-streamed on Livingston Butler Volland Funeral Home’s website. To view the service, go to Bill’s obituary and click the play button shown towards the bottom of the page. Private condolences may be sent to the family at www.lbvfh.com. Livingston Butler Volland Funeral Home & Cremation Center is serving the family.

William “Bill” Glenn Henkel was born on January 30, 1955, in Hastings, Nebraska to Glenn and Marilyn (Burling) Henkel.  Bill spent his childhood in the Bladen, Nebraska area. Bill graduated from Bladen High School in 1973. Bill attended Central Community College in Hastings and earned his degree in Diesel Mechanics.  After this, Bill worked at the Minden Terminal John Deere Implement until February of 1980. In March of 1980, Bill moved to Hastings and began working at Starr Seed Farm and was still working there at the present.

During Bill’s years of working in Minden, he would frequent the Terminal Café for his coffee breaks. It was there that he met and fell in love with the waitress who would eventually become his wife. Bill married Debra Ann (Kelso) Henkel on March 7, 1981. This union was blessed with four children, Heather, Macaela, Kelsey, and Bryson.

Bill enjoyed life to the fullest every day. He loved to golf, but his favorite past-time was talking to anyone and everyone. He never met a stranger, and if he did, they weren’t a stranger for very long.

Bill’s greatest joy was spending time with his wife, children, and grandchildren. Bill and his wife Deb spent 41 blessed years together watching their family grow in number and in love. Bill was always the first to volunteer to help his children with anything-repairs of any sort, advice, or support. He was also the very best “Papa” to his five grandchildren who could always count on him to give tractor rides, play with them, and give the best hugs.

Bill was a devoted and faithful servant of the Lord. He was a member of Faith Lutheran Church in Hastings and was proud to serve his church and his Lord in any capacity he was called to do.

Bill was preceded in death by his grandparents, parents, father-in-law John Kelso, Sr., and Shane Melcher- significant other of his daughter Macaela.

Aunts, uncles, nephews, nieces, cousins and so many wonderful friends too numerous to list.

To order memorial trees or send flowers to the family in memory of William "Bill" Henkel, please visit our flower store.