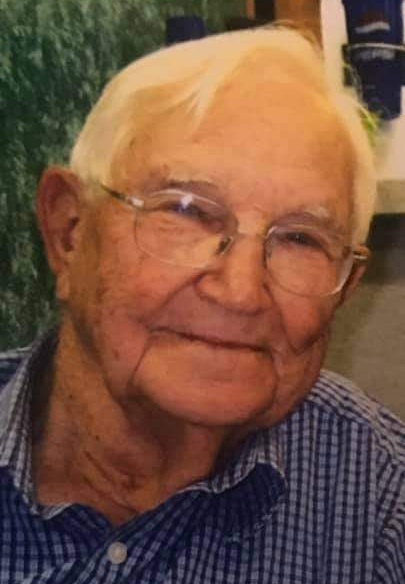 Services will be 10 a.m. Saturday, August 15, at Zion Lutheran Church in Hastings with Pastor Paul Warneke officiating. Burial will be at Glenvil Cemetery in Glenvil. Visitation is 1-7 p.m. Friday with the family present 5-7 p.m., at the funeral home, and one hour prior to service at the church. Memorials may be given to Zion Lutheran Church and the American Legion at Glenvil. For the health and safety of others face masks are required for those attending the visitation and funeral, your cooperation is appreciated. Since there are material sharing restrictions, we ask that you bring your own pen for signing the registration book or memorial envelopes. If you do not bring one, we can do that for you.

Bill was born on October 20, 1925, in Covina, CA. He was the son of William and Wilhelmina (Meyn) Munstermann.

Bill graduated from the Lincolnville, KS Luthern School in 1944. Later that year he was drafted into the Navy and served in World War II from 1944 - 1946 as an electrician aboard the USS Bordelon (DD/DDR-881), of which he was one of two remaining Plank Owners. After his service, Bill returned to the family farm in Lincolnville and purchased his Piper Vegabond airplane in 1946. Bill loved to use his plane to hunt coyotes and would frequently fly up to hunt ducks in the Flint Hills of Kansas. In the 1950s he moved to Nebraska with his brother Harvey and began custom hay work in the ammunition depot outside of Glenvil.

On August 20, 1961, Bill was joined in marriage by Charlotte Brown at the Rosedale United Methodist Church. Bill and Charlotte settled in Glenvil, NE where they were joined by son Michael and daughter Michele. Through the years Bill's faith, family, and farming were his loves.

Bill was a member of Zion Lutheran Church. He served on the Glenvil Cooperative Credit Union Board and was a Charter Member of the Glenvil American Legion Post 26 since 1965. He loved to fish and hunt, he helped with the family ceramic business which produced many commemorative plates for towns and churches. Bill was inducted into the Hastings Bowling Hall of Fame in 2015 and was co-owner of Pastime Lanes. He loved being a grandfather and was known for his special treats with his grandchildren. His joy was picking them up from school one or two days a week and sneaking them away to Dairy Queen.

Bill was preceded in death by his parents; brothers, Carl and Harvey Munstermann; sister, Lucile Vahsholtz; and wife, Charlotte.

He is survived by his son, Michael of Glenvil; daughter, Michele (Kevin) Onken of Kearney; grandchildren, Nicolette, Michaela, and Brandon Warnke; step-grandchildren, Colin and Lane Onken; and sister, Rosana Gates.

To order memorial trees or send flowers to the family in memory of William "Bill" Munstermann, please visit our flower store.